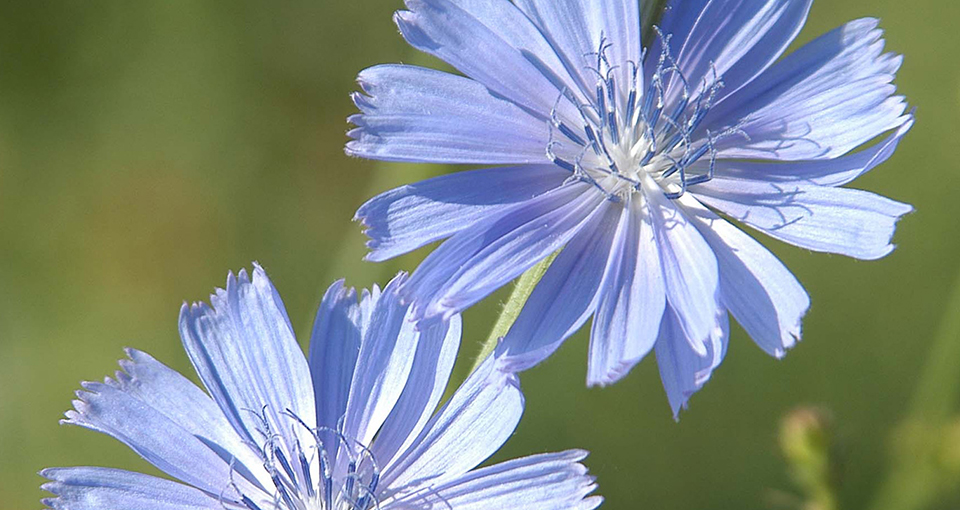 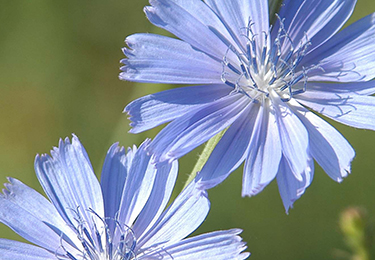 Common chicory (Cichorium intybus ssp. silvestre) is a wild vegetable that was very popular among our ancestors, who used it as a vegetable – it had already spread throughout Europe in prehistoric times. Its close botanical relatives include the endive, which is used in salads today, and root chicory. The common chicory is a perennial plant and can grow to an impressive height of up to 2m, but on barren soils it doesn’t grow higher than 15cm. It is characterised by its leaves, which are shaped like a crosscut saw and often have stiff hairs on the underside, and by its tongue-shaped petals. It’s mainly the multi-bloomed flower heads that catch people’s eyes, thanks to their bright blue colour.

This blue-flowered plant has long been used as a vegetable plant. Even in ancient times, people used its bitter-spicy leaves in salads for strengthening the stomach. Our forefathers also ate the young leaf shoots as a vegetable, cooked in salt water and sauteed with butter, or cooked it with meat. The leaves were also prepared as a tea and some sources even provide recipes for making it into wine. A herb cookbook from 1625 even contains a recipe for “busy housewives” to make a preserve out of it.
In the German culture, the plant not infrequently had magical properties ascribed to it: Potions made from this type of chicory were said to make those who drank them invincible, and even invisible.
In earlier times, the blue flowers were known as a food that could be eaten to help against sadness, and people intuitively ate a lot of it during life transition phases, in the same way that women ate chickpea during hot flushes.

Chrom III
Chrom III is an essential trace element.
Natural plant foods, such as whole grains, contain chrome III.
However, this is lost during processing. Anyone who has an unbalanced diet of refined sugars and white flour often takes in too little chrome.
Chrome III plays a vital role in the metabolism of macronutrients, i.e. carbohydrate (sugar), protein (amino fatty acids) and fat metabolism.

In addition, chrome III has a positive influence on a normal blood sugar level. It can also increase the concentration of tryptophan in the blood and the brain, due to its influence. Tryptophan is a vital raw substance for the happiness hormone serotonin and the sleep-inducing hormone melatonin.