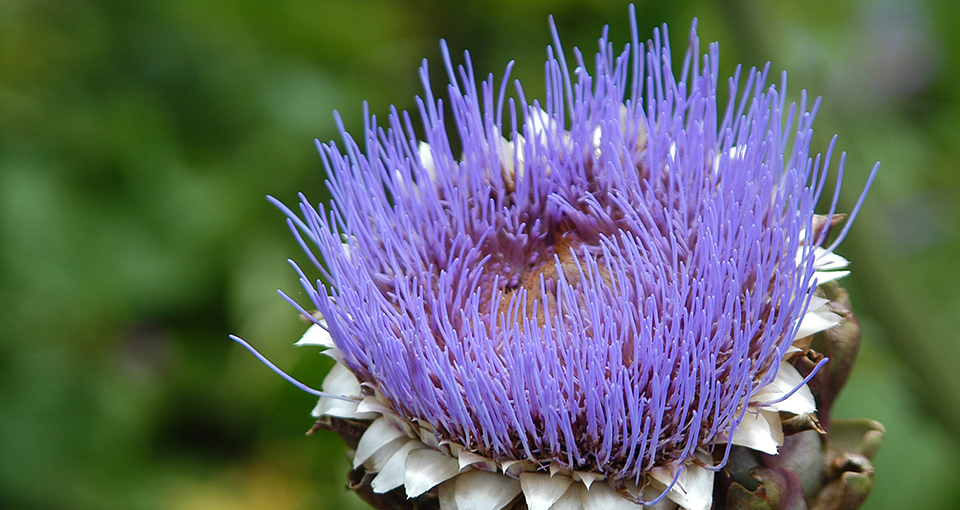 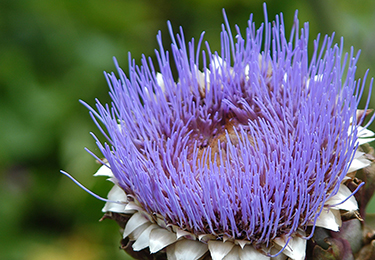 The chicory (Cichorium intybus silvestris) is a perennial plant which grows throughout Europe and stands out with its glowing sky-blue flowers. According to legend, the plant is an enchanted princess who waited so long at the side of the road for her beloved that a fairy turned her into this bright blue flower.

The wild dandelion (Taraxacum officinale) has long been popular as both a vegetable and a medicinal plant. Its bitter taste and its valuable vital substances have both been appreciated for centuries.

The wild artichoke or sow thistle(Cynara scolymus) probably has the most bitter taste and the most distinctive flower of the wild vegetables in the Urbitter organic granulate.

Bitter substances have always played an important role in the care of the stomach and the bowel. In medieval convent recipes , out of the surroundings of St. Hildegard of Bingen, there can be found references to the uses of local bitter herbs in order to stimulate the digestion. Almost 500 years ago Leonhart Fuchs, one of the founders of botany, recommended chicory to strengthen the stomach and stimulate the bowel movement. (Leohart Fuchs: New Kreueterbuch („Von Wegwart“) Cap. CCLX III), published by Michael Isingrin, Basel, 1543). In comparison to our present food, vegetables in particular used to be richer in bitter substances. Nowadays very few people remember bitter cucumbers or bitter carrots. In favour of a more pleasant flavour the majority of bitter substances has been removed from „modern“ vegetables and other foods. As a consequence we are missing out on an important and natural way of stimulating and regulating our digestion. Moreover, even our sense of satiety is manipulated because sweet flavours make us crave for more food even though we do not actually need it. The reason for this is that sweet taste sensations lead to an increased release of insulin – with the consequence that our appetite is stimulated.

Bitter substances from vegetables not only provide us with essential classes of nutrients rich in bitter substances but they are also good for the stomach and the bowel and regulate our daily digestion. Moreover, the bitter flavour sends a message to our body to be careful not to eat too much as the food might be poisonous.
The survival of some plants is based on the fact that they have a bitter taste and are consequently inedible for animals. They succeed in this by producing substances that have a very bitter flavour. In the course of evolution animals and thus humans have developed a natural sense of satiety that sets in as soon as something tastes bitter. The dangers of over-eating are therefore reduced.
The physiological process appears to be as follows: Some bitter substances initially increase the appetite, by causing the hormone ghrelin to be released. However, after half an hour, they cause the food to be retained longer in the stomach, causing a feeling of satiety to arise earlier. For this reason, we recommend Urbitter® organic tea or Urbitter® organic granulate (see the brochure “Dr. Pandalis indigenous medicine”) approx. 30 min. before a meal for people who eat fast and approx. 15 min. before a meal for slow eaters.
Positive side effects:
By activating digestive glands such as the liver, the gall and the pancreas the digestion is quicker and more complete. This can help counteracting obesity in the area of the belly. The physiological reason for this mechanism is easy to understand: Without the bitter stimulation of our digestion our bowel gets lazy and that leads to microbial imbalances (dysbiosis). As a result the body produces the famous love handles in order to strengthen the immune defence by an increased production of leptin, a hormone of the adipose (fat) tissue. However, if the gut flora is alright the fat accumulation in the area of the belly becomes unnecessary and is slowly reduced.

In the course of evolution our digestive system has proven its worth and therefore we should treat in a way it has been familiar with from time immemorial. This includes a natural diet that, above all, involves bitter substances. That way our stomach and our bowel can be made to function normally again. Therefore our eating habits will become normal again, just the way they always used to be.

The EFSA (European Food Safety Authority) is currently assessing the following health statements for the bitter plants in our Urbitter® products: