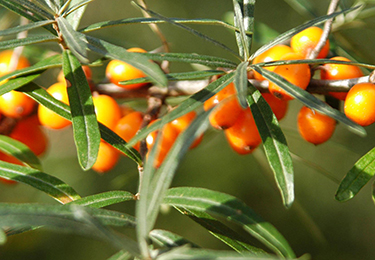 Sea buckthorn (Hippophae rhamnoides L.) belongs to the oleaster (elaeagnaceae) family. In contrast to normal willows it does not grow as a tree, but as a bush with a lot of branches. The orange-red fruits are characteristic for the plant which can grow up to 5 meters high – these hang on it from August till the middle of October. The sea buckthorn fruits are often incorrectly referred to as berries. In fact, they contain a core like a nut and, from a botanical point of view, they consequently belong to the nut fruits. The long sharp thorns on the protruding branches are typical for the sea buckthorn. They protect the fruit with their acidic-aromatic taste very effectively from predators and offer excellent protection to nesting birds. The leaves of the sea buckthorn are lance-shaped, green on the upper side and silvery on the under side. An extensive root system consisting of a taproot up to 3 meters deep and a branched web of side-roots makes it possible for sea buckthorn to grow also in locations prone to soil erosion. Sea buckthorn bushes are therefore frequently found in banks of dunes at the sea or on the banks and embankments of rivers. The plant owes its name to its ability to grow on sandy ground which is low in nutrients in Germany, Holland and English-speaking areas: Sanddorn, Zanddoorn, Duindoorn or sea buckthorn.

Sea buckthorn is a traditional plant for consumption as well as for healing purposes which had been forgotten for a long time in Central Europe. In the Eastern European or Asian areas it has long since been held in high regard for cosmetic and medicinal purposes. As far back as the Middle Ages people here were already aware of sea buckthorn’s generally favourable effect on their health. Village quacks used it as a blood-staunching healing agent. In England in the 16th century the plant was used to make jam and also as a remedy against sea-sickness.
The botanical name of sea buckthorn “hippophae rhamnoides” comes from the Greek and is derived from a further application of the sea buckthorn leaves. They were fed to horses (Greek = hippos) to give their coat a special shine (Greek = phaos). To this day, the trick remains very popular amongst French sheep breeders. If one takes a look at the overall composition of the constituents, then sea buckthorn is surely one of the most valuable types of wild fruit. It clearly eclipses the citrus fruits because of its high vitamin C content. On average, it contains nine times as much of the vitamin with the anti-oxidative effect as oranges or lemons. Sea buckthorn has three times as much vitamin C as blackberries and thus far exceeds them in this respect. Other constituents such as fruit acid, fatty oil, calcium, magnesium and provitamin A make the small, knobby fruits even more valuable for our health. The high vitamin C content (450 mg/100 g) and the sour taste have earned the plant the nickname “lemon of the North”.

Vitamin C is – just like other vitamins also – unstable over long periods in aqueous surroundings. This is because of its anti-oxidative potential, which can abreact easily by contact with water. Sea buckthorn juices are therefore not so suitable for vitamin supply.